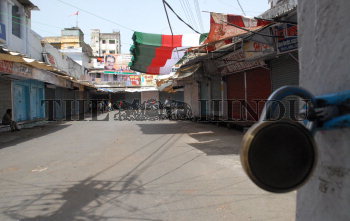 Caption : BHOPAL, 02/05/2008: Shops were closed at Chowk Bazar in Bhopal on May 02, 2008, during 'Bharat bandh' called by Bharatiya Janta Party, to protest against the UPA Government's failure to control the rising prices. Photo: A.M. Faruqui