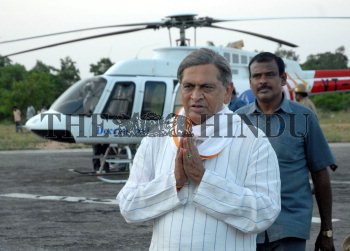 Caption : MYSORE, 30/04/2008: Former Chief Minister of Karnataka S.M. Krishna arriving by a special plane, in Mysore on April 30, 2008 evening, as part of his election campaign for the Congress party. Photo: M.A. Sriram