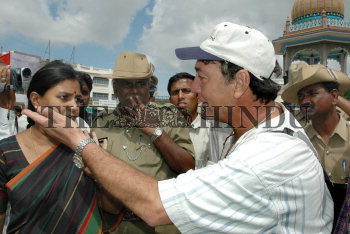 Caption : A foreigner identifying himself as an Iraqi national entered into an altercation with SUCI activists in Mysore November 9, 2006 when they were holding a protest against the DEATH SENTENCE to Saddam Hussein. PHOTO: M A SRIRAM.