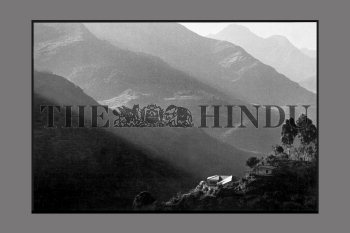 Caption : Attn News EditorPhoto for Daily:-A view of Himalayas by Anil Rishal Singh on display of his photographs during a show on Forms in Lucknow on November 9, 2006. Anil an emienent photo artist of international repute has exhibited his show in Atlanta and in several cities of India. Photo: Subir Roy