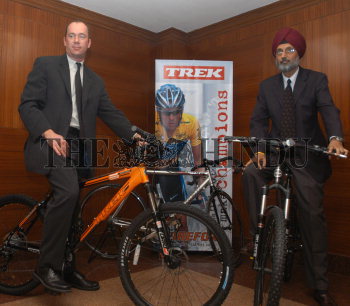 Caption : NEW DELHI, 09/11/2006: J. Peter St. Onge, International Territory Manager, Trek Bicycles Corporation, US, with Shiv Inder Singh, Managing Director, Firefox Bikes, at the launch of Trek Bicycles in the Capital on November 09, 2006. Trek Bicycle Corporation has tied up with Firefox Bikes to sell their high-end models in the country. Firefox has launched five models of mountain bikes with a price tag ranging from Rs 13,500 to Rs 33,000 and two models of road bike that would be priced at Rs 36,000 and Rs 47,000. Photo: Ramesh Sharma