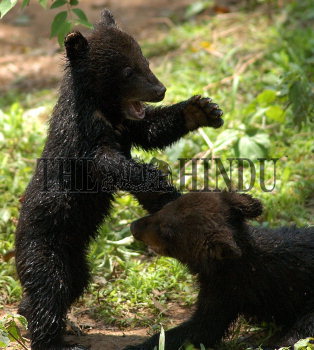 Caption : GUWAHATI, 27/04/2008: Two months old babies of the old Himalayan Black Bear are playing in the Zoological Park in Guwahati on April 27, 2008. This is for the first time that the Himalayan black bear successfully breed in captivity in Guwahati zoo. The Himalayan black bear is greatly in need of conservation due to a high mortality rate of their offsprings and extensive hunting. In India, their habitat is found right from Kashmir till Assam in the Himalayan ranges residing in an altitude ranging from 5000 ft to 12, 000 ft. Photo: Ritu Raj Konwar