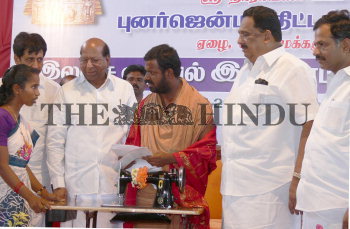 Caption : VELLORE, 27/04/2008: Sri Sakthi Amma, head of the Sri Narayani Peedam having a word with a beneficiary after handing over a sewing machine to her under the 'Punar Janma' scheme at the Peedam premises in Thirumalaikkodi near Vellore on April 27, 2008. Electricity Minister Arcot N. Veerasamy (second from left), Vellore MLA C. Gnanasekharan (left), Vellore Municipal Chairman P. Karthikeyan (right) and Ranipet MLA R. Gandhi look on. Photo: D. Gopalakrishnan