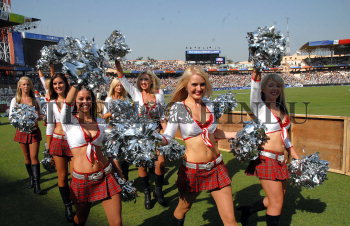 Caption : KOLKATA, 25/04/2008: The Cheer leaders during their performance at Eden Gardns in Kolkata on April 20. The group, engaged to entertain the spectators in between the IPL cricket matches, are in the midst of controversy over what is being described by many as the "vulgar" or "indecent" performance. Reportedly, the Mumbai police has announced on Friday that the Cheerleadrs could perform at the stadium in Navi Mumbai on April 27. Interestingly, a section of Left Front leaders also have expressed their reservation about the performance of the Cheerleaders in Kolkata. Photo: Arunangsu Roy Chowdhury