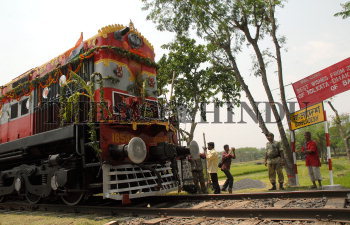 Caption : Kolkata: Maitree Express, the first bi-weekly passenger train from Kolkata to Dhaka entering Bangladesh after 1965 on Monday, the Bengali New Year day from Gede border at Nadia district of West Bengal. The first plan to run a train from Calcutta to Dacca was conceived by Eastern Bengal Railway Company in 1856 and by 1862 there was a train link from Sealdah terminus in Calcutta to Kusthia (presently in Bangladesh). Then it was extended up to Goalandu and Decca. The regular overnight passenger train service was continuing before the partition in 1947. After the partition the limited train services continued up to 1965 in the then East Pakistan. Photo: Arunangsu Roy Chowdhury April 14, 2008.