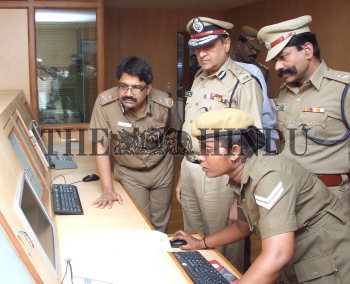 Caption : TIRUCHI, 24/04/2008: TRYST WITH TECHNOLOGY: The Director General of Police K.P. Jain inspecting the Model Control Room in Tiruchi on April 24, 2008. From left, the City Commissioner S. Pramod Kumar and Superintendent of Police, Tiruchi Rural, A. Kaliamoorthy, are also seen in the picture. Photo: R. Ashok