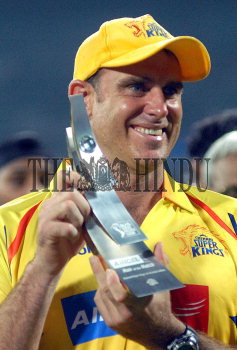 Caption : CHENNAI, 23/04/2008: Matthew Hayden of Chennai Super Kings poses with the Man of the Match trophy at the prize distribution ceremony after the Chennai team's victory over Mumbai Indians in the DLF Indian Premier League Twenty20 cricket match at the M.A. Chidambaram Stadium in Chennai on April 23, 2008. Photo: M. Vedhan