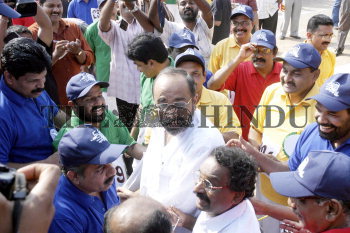 Caption : THIRUVANANTHAPURAM, 23/4/2008: Minister for Transport Mathew T. Thomas and Minister for Electricity A.K. Balan being cheered by M.L.A.'s on arrival at the Chandrasekhharan Nair stadium in connection with an atheletics meet organised as a part of the golden jubilee celebrations of the State Legislature in the city on April 23, 2008. Photo: C. Ratheesh Kumar