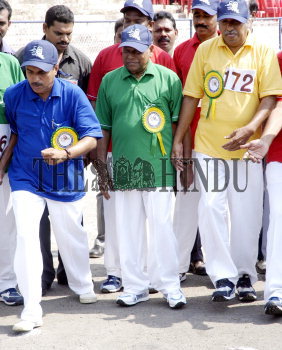 Caption : THIRUVANANTHAPURAM, 23/4/2008: Chief Minister V.S. Achuthanandan, Minister for Sports M. Vijayakumar and Opposition Leader Oommen Chandy taking part in the 400 meter heats held at the Chandrasekharan Nair stadium as a part of the golden jubilee celebrations of the State Legislature in the city on April 23, 2008. Photo: C. Ratheesh Kumar