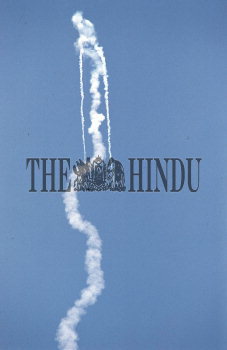 Caption : The Augmented Satellite Launch Vehicle (ASLV) just after the launch, with its two strap-on boosters ignited. The vehicle plummeted into the Bay of Bengal after few miunutes as its first stage motor failed to ignite. ASLV, the first in the second generation vehicles of the ISRO is ready at the launch pad. The vehicle, which would provide vital inputs for India's future launch projects, is scheduled to take off with its 150-kg satellite before April 3, 1987 from Sriharikota in Andhra Pradesh. Pd. 04/04/1987