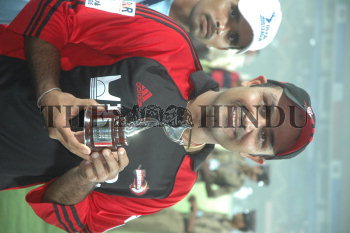 Caption : HYDERABAD, ANDHRA PRADESH, 22/04/2008: Virender Sehwag, captain of Delhi Daredevils, with the Man of the Match trophy at the award ceremony after the Delhi team's victory against Hyderabad Deccan Chargers in the DLF Indian Premier League Twenty20 cricket match at the Rajiv Gandhi Stadium in Uppal on April 22, 2008. Virender Sehwag scored an unbeaten 94 runs in the match. Photo: P.V. Sivakumar