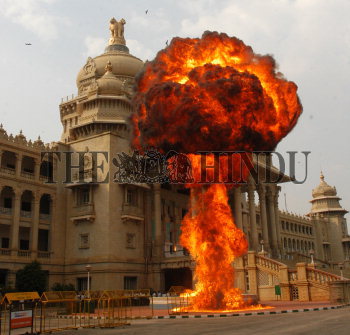 Caption : BANGALORE, 22/04/2008: A huge blast goes off in front of Vidhana Soudha during the Civil Defence Mock Drill Exercise by the directorate of Home Guards and Civil Defence, Fire department, in Bangalore on April 22, 2008. Around 100 officials of Fire department along with 450 members of Home Guards and Civil defence, participated in the Mock Drill which was held in and around Vidhana Soudha and Vikasa Soudha. Photo: K. Murali Kumar