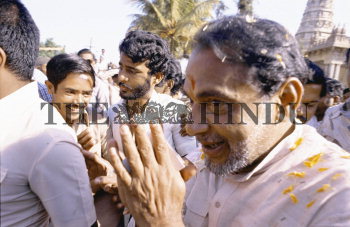 Caption : Ramakrishna Hegde, Chief Minister of Karnataka, greeted by public during his padayatra at Basavanagudi in Bangalore, the capital of the southern Indian State of Karnataka, after he won the election on 07/03/1985.