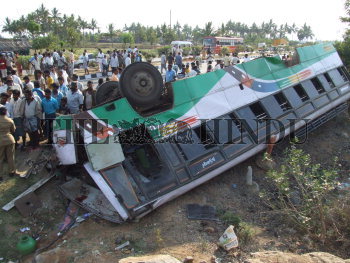 Caption : KRISHNAGIRI, 20/04/2008: As many as 18 passengers sustained injuries when the Government bus in which they were travelling lost control and capsized at Orappam village near Krishnagiri on April 20, 2008. Photo: N. Bashkaran