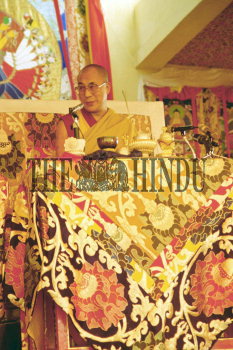 Caption : The Dalai Lama addressing the assemblage of monks, young and old, who had come to Bodh Gaya for the Kalachakra (the wheel of time) ceremony. This is the 11th ceremony held so far by Tenzin Gyatso, believed to be the 14th incarnation of the Dalai Lama and the first one being held in Bodh Gaya, a holy city in the northern Indian State of Bihar from December 22 to 24, 1985.