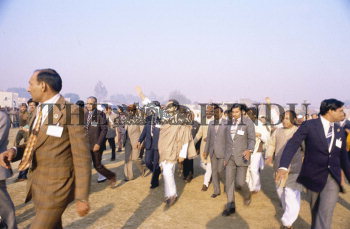 Caption : The Prime Minister , Mr. Rajiv Gandhi waving to the crowd at Bulandsehar in the northern Indian State of Uttar Pradesh where he is to address an election meeting as part of his campaign for the 1984 general elections.