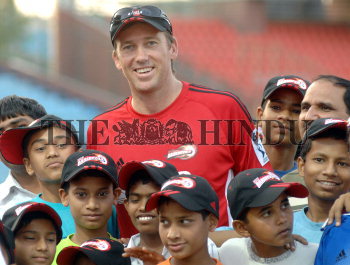 Caption : NEW DELHI, 18/04/2008: Glenn McGrath of Delhi Daredevils team with kids during a practice session on the eve of the DLF Indian Premier League Twenty20 cricket tournament against Rajasthan Royals at the Ferozeshah Kotla ground in New Delhi on April 18, 2008. Photo: Rajeev Bhatt