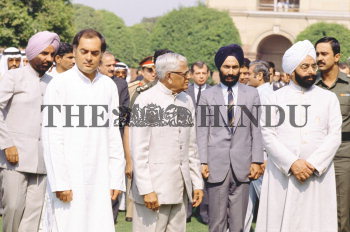 Caption : Over a hundred Foreign dignitaries - Presidents, Prime Ministers, Princes and Foreign Ministers and others came to New Delhi to pay a memorable tribute to Prime Minister Ms. Indira Gandhi, who was assassinated by her own security guards on October 31.The Prime Minister Rajiv Gandhi, the President Zail Singh, and the Vice-President R. Venkataraman standing in Rashtrapati Bhavan to receive the Foregin dignitaries.