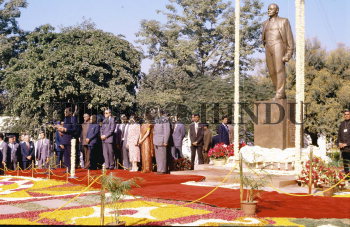 Caption : The Prime Minister Rajiv Gandhi and his wife Mrs. Sonia Gandhi along with the USSR Prime Minister Nikolai Ryzhov and his wife during the function to unveil the life size statue of Lenin at Nehru's Park in New Delhi, the capital of India. Others seen in the picture are Foreign Minister P.V. Narasimha Rao and H.L. Kapur. Picture shows Rajiv Gandhi addressing the gathering after unveiling the statue. November 1987.