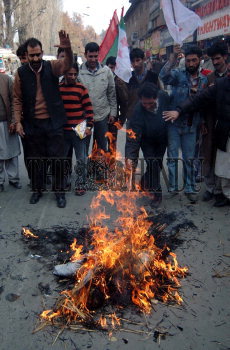 Caption : Activists of pro-India Panthers Party shout anti-US slogans as they burn an effigy of US President George W. Bush during a protest rally in Srinagar on November 08, 2006. The rally was organised to protest against the death sentence handed down by a tribunal to the deposed Iraqi president Saddam Hussain and two of his associates for their role in the killing of 148 Iraqi people. Photo: Nissar Ahmad