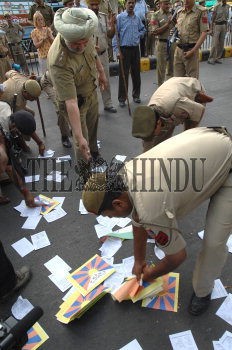 Caption : New Delhi, April 17, 2008 ---- Police personnel collecting hand bills and Indian and Buddist flag after Tibetan protesters arrested, near the Le Meriden Hotel where the Olympic Torch is being kept. Some Tibetan protesters are also arrested during the Olympic torch rally in New Delhi on Thursday. April 17, 2008. Photo: Shanker Chakravarty