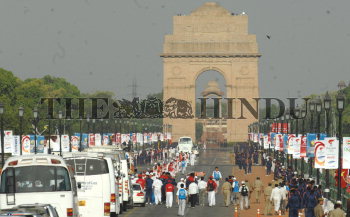 Caption : NEW DELHI, 17/04/2008 : Beijing Olympic Torch is being carried by various Sports and Film personalities from Raisina Hills to the India Gate through Rajpath in New Delhi on April 17, 2008. Photo by_Rajeev Bhatt