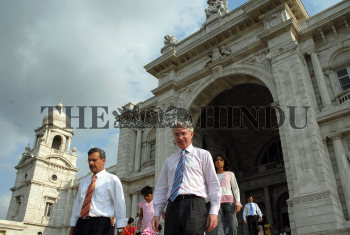 Caption : Kolkata: Exclusive: Mr. PETER Sands (right), Group Chief Executive officer Standard Chartered Plc. along with Mr. Neeraj Swaroop Regional Chief Executive, India and South Asia are at the Victoria Memorial Hall in Kolkata on Wednesday. Mr. PETER visits the city to celebrate the 150th anniversary of the bankās operation in India. The international bank was opened its first Indian branch on April 12, 1858 in Kolkata and now operates with 83 branches in 33 cities. Mr. PETER went around the historical exhibition of Bengal and Calcutta displayed in the Hall. Photo: Arunangsu Roy Chowdhury April 16, 2008.