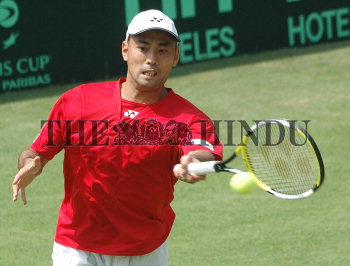 Caption : NEW DELHI 13/03/2008: Japanese Satoshi Iwabuchi in action against Leander Paes of India in the reverse singles match of the Davis Cup tie at DLTA courts in New Delhi on April 13, 2008. Photo:Sandeep_Saxena