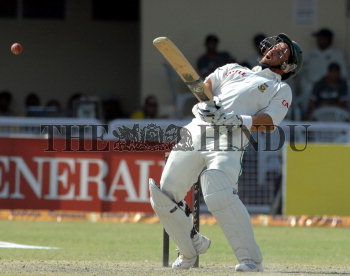 Caption : Future Cup 3rd test Kanpur-13/04/2008--South Africa's Mark Boucher reacts as he fails to evade a bouncer off Ishant Sharma and gets caught behind on day three of the third cricket Test match of Future Cup between India and South Africa at the Green Park Stadium in Kanpur on April 13, 2008. Photo:S_Subramanium