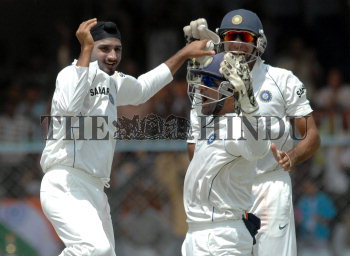 Caption : Future Cup 3rd test Kanpur-13/04/2008--India's Harbhajan Singh celebrates with M.S.Dhoni and V.V.S.Laxman after getting Hashim Amla's wicket on day three of the third cricket Test match of Future Cup between India and South Africa at the Green Park Stadium in Kanpur on April 13, 2008. Photo:S_Subramanium