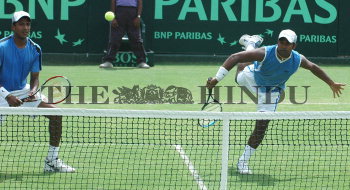 Caption : NEW DELHI 12/04/2008: Indian Tennis players Leander Paes and Mahesh Bhupathi on way to win against Takao Suzuki and Satoshi Iwabuchi of Japan (not in pic) in the doubles match of the Davis Cup tie at DLTA courts in New Delhi on April 12, 2008. Photo:Sandeep_Saxena