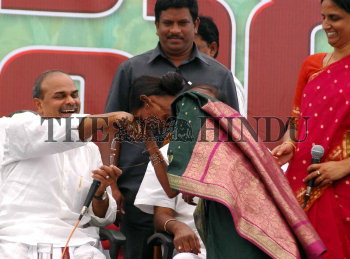 Caption : VIKARABAD, 12/04/2008: An exuberant Andhra Pradesh Chief Minister Y. S Rajasekhar Reddy is all smiles as one of the beneficiary shows her gratitude to the Chief Minister by kissing his hand while Minister for Mines and Geology P. Sabitha Indira Reddy looks at a massive public congregation organized to celebrate the fifth anniversary of the historic padayatra undertaken in the summer of 2003, to inspire the rank and file of the party, at Mominpet in Vikarabad district of Andhra Pradesh on April 12, 2008. Photo: Mohammed Yousuf