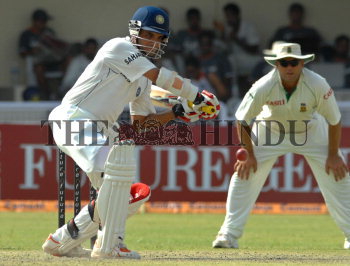 Caption : Future Cup 3rd test Kanpur - 12/04/2008 -- Indian batsman Sourav Ganguly eyes the ball to play a shot to the fence off the bowling of Dale Steyn of South Africa as Jacques Kallis looks on during day two of the third cricket test of Future Cup at the Green Park Stadium in Kanpur on April 12, 2008. Photo:S_Subramanium