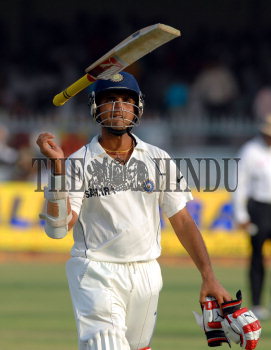 Caption : Future Cup 3rd test Kanpur-12/04/2008 -- Indian batsman Sourav Ganguly tosses his bat as he walks back after losing his wicket on 87 runs on day two of the third cricket test of Future Cup at the Green Park Stadium in Kanpur on April 12, 2008. Photo:S_Subramanium