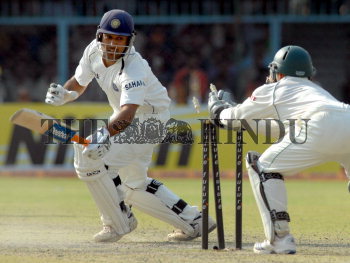 Caption : Future Cup 3rd test Kanpur-12/04/2008 -- Indian batsman M.S. Dhoni looks back while being stumped by Wicket Keeper Mark Boucher of South Africa off the bowling of Paul Harris during day two of the third cricket test of Future Cup at the Green Park Stadium in Kanpur on April 12, 2008. Photo:S_Subramanium