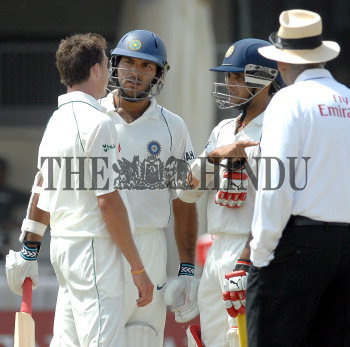 Caption : Future Cup 3rd test Kanpur-12/04/2008 -- Yuvraj Singh and Dale Steyn involved in an argument as Sourav Ganguly and Umpire Billy Doctrove look on during day two of the third cricket test of Future Cup at the Green Park Stadium in Kanpur on April 12, 2008. Photo:S_Subramanium