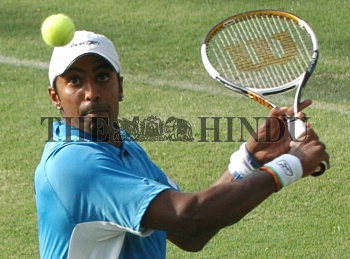 Caption : NEW DELHI, 11/04/2008: Prakash Amritraj of India in action against Go Soeda (not in pic) of Japan in the singles match of the Davis Cup Asia-Oceania Group 1 tie at the R.K. Khanna tennis stadium in New Delhi on April 11, 2008. Photo: Sandeep Saxena