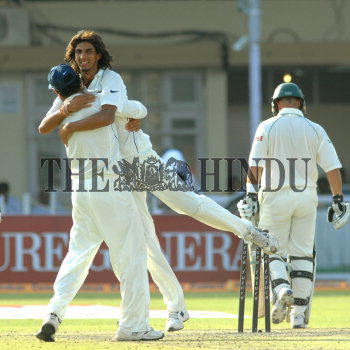 Caption : Future Cup 3rd test Kanpur-11/04/2008 -- Indian speedster Ishant Sharma celebrates with Yuvraj Singh on getting the wicket of Mark Boucher of South Africa on day one of the third cricket Test match of Future Cup at the Green Park Stadium in Kanpur on April 11, 2008.Photo:S_Subramanium