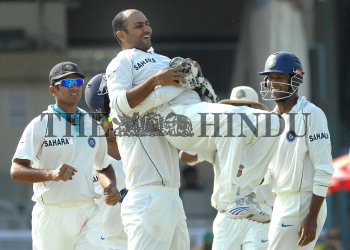 Caption : Future Cup 3rd test Kanpur-11/04/2008 -- India's Virender Sehwag lifted up by wicketkeeper M.S. Dhoni after getting the wicket of Ashwell Prince of South Africa as Rahul Dravid and Wasim Jaffer look on on day one of the third cricket Test match of Future Cup at the Green Park Stadium in Kanpur on April 11, 2008. Photo:S_Subramanium