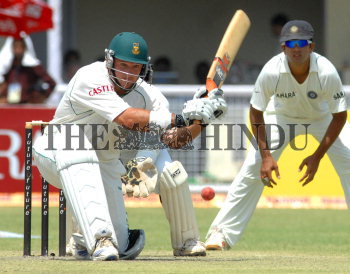 Caption : Future Cup 3rd test Kanpur-11/04/2008 -- South African batsman Graeme Smith eyes the ball to hit a four off Piyush Chawla of India as Rahul Dravid looks on on day one of the third cricket Test match of Future Cup at the Green Park Stadium in Kanpur on April 11, 2008. Photo:S_Subramanium