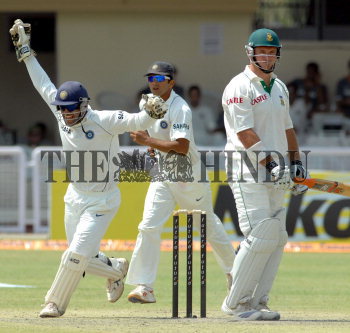 Caption : Future Cup 3rd test Kanpur-11/04/2008 -- Indian wicketkeeper M.S.Dhoni and Rahul Dravid rush to celebrate after Graeme Smith of South Africa was caught by Wasim Jaffer off the bowling of Yuvraj Singh on day one of third cricket Test match of Future Cup at the Green Park Stadium in Kanpur on April 11, 2008. Photo:S_Subramanium