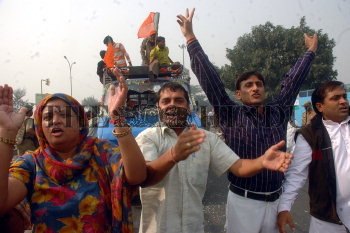 Caption : NEW DELHI: A tempo carrying protesters is damaged during the Delhi bandh called by traders protesting against the sealing of commercial establishments in residential areas, in New Delhi on November 07, 2006. Photo: Sandeep Saxena