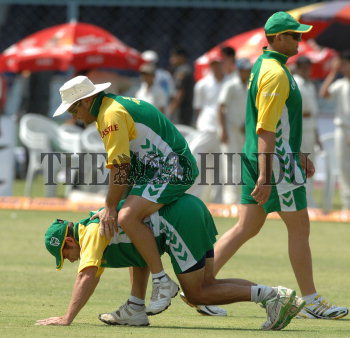 Caption : KANPUR, 10/04/2008: South African wicketkeeper Mark Boucher riding piggy back on Neil McKenzie as Jacques Kallis walks past them during the practice session at the Green Park Stadium in Kanpur, on the eve of the third and final cricket Test match of the Future Cup series between India and South Africa, on April 10, 2008. Photo: S. Subramanium