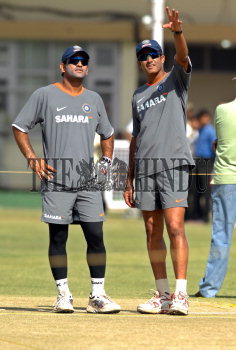 Caption : KANPUR, 10/04/2008: Indian captain Anil Kumble (right) discussing a point with teammate Mahendra Singh Dhoni while inspecting the pitch during a practice session at the Green Park Stadium in Kanpur, on the eve of the third and final cricket Test match of the Future Cup series between India and South Africa, on April 10, 2008. Photo: S. Subramanium