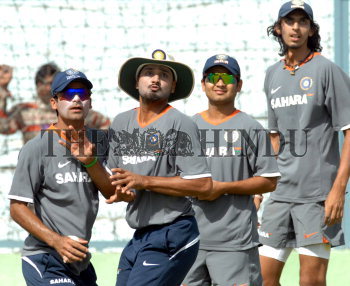 Caption : Future Cup 3rd test Kanpur-09/04/2008--India's Harbhajan Singh gets ready for a catch watched by team mates, Mohammad Kaif, Piyush Chawla and Ishant Sharma during their practice session for the third test of Future Cup against South Africa at the Green Park Stadium in Kanpur on April 9, 2008. Photo:S_Subramanium