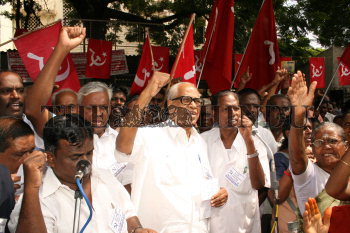 Caption : MADURAI: The Communist Party of India (Marxist) State secretary, N. Varadarajan (centre) participating in a demonstration, protesting against the violence and irregularities during the October local body elections in Chennai, in Madurain on November 06, 2006. Photo: S. James