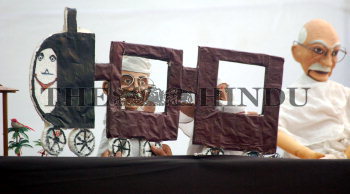 Caption : A puppet show held at the official residence of Ashok Gehlot, general secretary All India Congress, in Jaipur on November 02, 2006, on the life of Mahatma Gandhi from his Childhood till the end is very much appreciated by the good gathering. The scene is the train episode in which Gandhi was thrown out of train because he was in Dhoti. Photo: Gopal Sunger