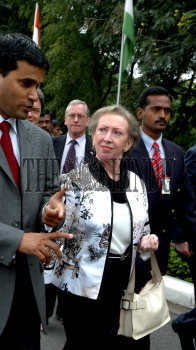 Caption : HYDERABAD: British Foreign Minister Margaret Beckett is being escorted by T. Hari, Head of Human Resources, Satyam Computer Services Limited around the campus of the Satyam Technology Centre in Hyderabad on November 06, 2006. Satyam Computer is one of the country's largest investors in the United Kingdom. Photo: Mohammed Yousuf