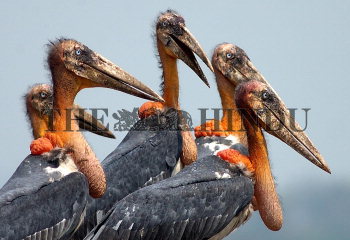 Caption : GUWAHATI 06-04-2008 : (ADJUTANT STORK IN GUWAHATI) A group of Greater Adjutant Stork looks for food in a garbage dumping site near Deepor Beel bird sanctuary in Guwahati on Sunday, April 06, 2008.Fast vanishing wetlands in and around Guwahati city has now become a major threat for the survival of this bird species. Guwahati city has the largest concentration of the scheduled one Greater Adjutant Stork in the world but their numbers gradually declining due to loss of wetlands, habitat and availability of food. Earlier these big birds were largely seen in wetlands areas but now majority of them are seen in garbage dumps. PHOTO: RITU_RAJ_KONWAR