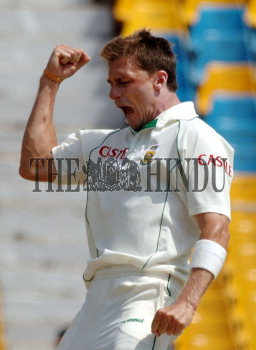 Caption : AHMEDABAD, 03/04/2008: South African bowler Dale Steyn exults after getting the wicket of Indian batsman S. Sreesanth (not in pic) on the opening day of the second cricket Test match of the Future Cup series at Sardar Patel Stadium in Motera, Ahmedabad, on April 03, 2008. Photo: K.R. Deepak